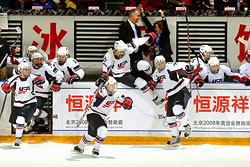 The IIHF World Women's Ice Hockey Championship victory was particularly sweet for Kevin Houle, head coach of the Plattsburgh State women's ice hockey team because he was on the sidelines of that game as assistant coach the U.S. Women's National team.

Houle is a three-time NCAA Coach of the Year and has directed the Plattsburgh State Cardinals Women's Hockey team to the last two Division III championships.

He is 121-19-7 in five seasons with SUNY Plattsburgh. Houle joins elite company as only Middlebury and Elmira had multiple championships at this level of NCAA play. Houle is the winningest active coach, men's or women's, in NCAA all-Divisions with an .847 percentage.

In addition to his successful season at SUNY Plattsburgh, Houle was named as an assistant coach on this year's U.S. Women's National Team.

He served with head coach Jackie Barto's squad in Sweden in the fall and helped lead the team to victory in China at the 2008 World Championships.

Houle is a 1986 graduate of Boston College, where he lettered for four years for coach Len Ceglarski.

It's groundbreaking to have a current coach on our SUNY Plattsburgh staff participate in international competition.  Kevin has helped to spread the good news about Plattsburgh Athletics.  His presence with the Women's National Team brings credence to our program,and speaks volumes about the quality of his coaching expertise," said Bruce Delventhal, director of athletics.

For more coverage of the world championship, visit http://www.iihf.com/channels/iihf-world-womens-championship/home.html.

In the first period, Canada gained a 1-0 lead at the 1:57 mark when Sarah Vaillancourt flipped the puck into the right corner of the net during a four-on-four situation.

Team USA bounced back with a pair of goals to take a 2-1 lead before the period had expired. Jenny Potter (Edina, Minn.) was first to score for the Americans, as Julie Chu (Fairfield, Conn.) fed her the puck and she one-timed it from the right point at 8:09 during a U.S. power play. Captain Natalie Darwitz (Eagan, Minn.) then gave Team USA the one-goal advantage as she skated up the length of the ice, deked in front of the Canadian net and put a wrist shot inside the right post at 17:41.

In the middle frame, the United States tallied twice more to take a 4-1 lead. The first was scored during a two-man advantage when Angela Ruggiero (Harper Woods, Mich.) took a shot from the top of the slot that bounced off the end boards and was tipped in by Potter at 10:54. Darwitz then netted her second of the evening, again skating up the length of the ice on the right side and sniping the puck just inside the far post past Canadian netminder Kim St-Pierre at 18:41.

In the final stanza, Canada potted a pair of goals within a 1:10 span to cut the U.S. lead to 4-3. Katie Weatherston scored at 8:38, followed by a power-play rebound-goal from Jennifer Botterill at 9:48. Team USA then killed off three penalties in the final half of the period to secure the win.

St-Pierre and Charline Labonte combined for 25 saves in net for Canada, while Jessie Vetter (Cottage Grove, Wis.) stopped 21 for the United States.