A retired SUNY Plattsburgh associate dean of students was recently recognized by an organization to which she's dedicated much of her life.

Cheryl Hogle '68 G'72 received the rare Laurel Crowned Circle Award from Omicron Delta Kappa during a July 19 ceremony at the Valcour Conference Center. It's the highest award that the national leadership honor society can bestow. 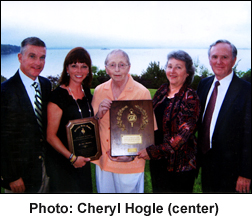 Hogle – who was also an executive director of auxiliary services during her time at SUNY Plattsburgh – is a charter member of the SUNY Plattsburgh circle (i.e. chapter). And she's been an integral part of its development since the circle was founded in 1981, serving in several capacities as she mentored ODK student leaders. Most notable of these honors: Being ODK's first woman to serve as national president (1998-2002). Before that, she served as faculty province director (1988-1994) and national vice president for extension (1994-1998).

As vice president for the extension, Bisese noted, she "brought extraordinary growth" to the society by chartering 27 new circles.

"Cheryl best exemplified the ideals of the society through her greater service to the society," he said.

The rare award (only 19 people have received it since 1914) is yet another honor for Hogle, who already has two ODK awards named after her: the SUNY Plattsburgh circle's Cheryl Hogle Sophomore Leader of the Year Award and the national Cheryl M. Hogle Distinguished Service Award. This year, Bisese awarded the latter to another SUNY Plattsburgh alumna, JoAnn Romano '85, at the same ceremony.

Omicron Delta Kappa was the first national college honor society to recognize meritorious leadership and service in extracurricular activities and to encourage development of general campus citizenship. Its circle at SUNY Plattsburgh, of which Hogle is a founding member, received an honor of its own last month: the 2009-2010 Superior Circle Award. This award is presented to ODK circles, or chapters, that meet all Circle of Distinction criteria and that sponsor at least two substantial campus-wide programs.

Hogle's experience at SUNY Plattsburgh – as both a student and undergraduate – served her well.

"I was fortunate that I had some very good mentors," she said from her home in Florida.

"I was encouraged to become involved in leadership at the student level. And I wasn't always successful, but I did stick to it. I learned to stand in front of a group and speak, I learned to trust others.... I learned those valuable lessons from them."