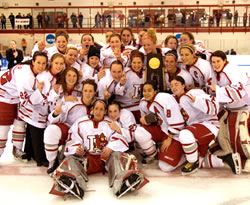 This season, Plattsburgh recorded a 25-3-1 overall record, 14-1-1 league mark for the team's fifth-consecutive Eastern College Athletic Conference West Division regular-season crown and ended as the No. 1-ranked team in the USCHO.com poll for the third year in a row.

On the eve of the national tournament, during the NCAA Championship Banquet, the American Hockey Coaches Association announced its All-America Team for NCAA Division III.

Blanchard and Devereux both were named to the AHCA All-America First Team.  Blanchard, a three-time All-American, also earned the 2008 Laura Hurd Award given to the nation's top player, scoring a career-high 28 goals as part of a 48-point season.

Coach Kevin Houle completed his fifth season at the helm as the winningest active women's coach in NCAA all-divisions with an .846 percentage, going 120-19-7 since the 2003-04 campaign. 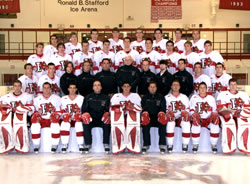 That marked just the second time that the team was shut out in NCAA Tournament play during Bob Emery's 19-year coaching tenure and was only the third loss in the last 17 games since December. The Cardinals ended their season with a 25-5 record - third in the nation with 25 victories.

Plattsburgh, a two-time NCAA champion in 1992 and 2001, was making its first Finals appearance since winning their last national title with Coach Emery behind the bench.

The Cardinals have qualified for the NCAA Division III Tournament 16 times, which is more than any other school, and reached the Frozen Four semifinals 10 times, which is second all-time.

The Cardinals captured their all-time best 18th State University of New York Athletic Conference crown with victories over Potsdam and 2007 NCAA champion Oswego after also taking the No. 1 position during the regular season with a 14-2 league slate.

Graduating only three senior - Mike Baccaro, T.J. Cooper and C.J. Tozzo - from this year's squad, Plattsburgh is in prime position to be a national contender in 2008-09 and beyond.

For more information about Athletics at SUNY Plattsburgh, please contact: