If there's a twinkle in Dr. George Flynn's eyes lately, it's probably because Stardust left it there.

The Stardust Project, NASA's comet sample return mission launched in February 1999, returned to Earth - the Utah desert to be exact - in January with a container of stardust samples collected from the 4.6 billion-year-old comet named Wilt-2 (pronounced Vilt after its Swiss discoverer). 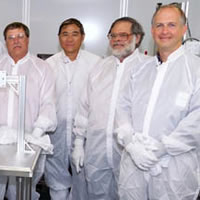 Flynn, SUNY Plattsburgh physics professor, leads a team of scientists who hail from four continents who will analyze the composition of the stardust samples.

"I'm running the chemical composition team, because I participated in the development of the collection technique," Flynn said from his office in Hudson Hall.

A substance called aerogel, a silicon material that can trap small particles and store them yet leave them unscathed, was developed.

It was theorized that if the aerogel was encased in a collection unit on a spacecraft that was then flown through the dust and debris emitted from the comet, it could successfully be brought back to Earth and analyzed.

Flynn had been working with the University of Chicago since before the mission to develop techniques to analyze samples collected from a comet while the samples were still in the aerogel collection medium.

Not only did this make scientific sense, it made dollars and cents because this type of unmanned mission, on a smaller, faster spacecraft, fit into NASA's budget and overall mantra of doing things smaller, faster and cheaper, Flynn said.

The spacecraft was about the size of a bus, Flynn said. 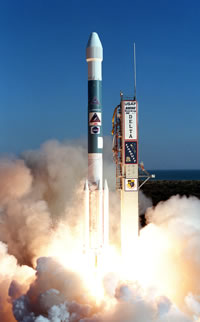 "The Stardust Project had one simple purpose - to go get pieces of the comet and bring them back for study," he said. But, prior to the mission's launch, it wasn't clear what portion of the samples returned would gross the best outcomes.

"It wasn't clear if we analyzed particles at the end of the (comet's) trail that it would be representative of the whole collection," Flynn said. "We've been developing these techniques over the last 15 years to analyze all of the matter distributed along a track."

By using instruments that utilize intense x-ray beams, the researchers were able to determine "we were right," Flynn said. "This was crucial to the success of the project - to analyze all the materials distributed along the comet's trail."

Flynn, his colleagues and members of five other research teams made a presentation at the Johnson Space Center in Houston, Texas, March 13.

"Six groups (of scientists) are doing analyses of different aspects recovered from the samples," he said. "Each group reported at the conference."

How Old Are We?

Flynn said one of the purposes of studying the dust from Wilt-2 is to determine the age of the solar system.

"Comets store pristine samples of dust from the formation of the solar system," he said. "This is something we've speculated on but never had a sample to analyze - until now. I think there are going to be enough surprises in these samples to keep researchers going for generations.

"Lunar rocks brought back in 1969 are still being requested by researchers. Once the preliminary analysis is done, I wouldn't be surprised if 35, 40 years from now people are still requesting samples to study," said Flynn.

To learn more about about the Physics program at SUNY Plattsburgh, please contact: