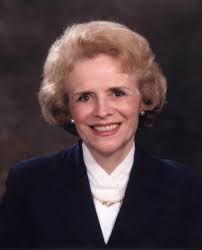 Dr. Sherry Hood Penney, 81, who served as interim president at SUNY Plattsburgh from 1986 to 1987, passed away at her Florida home.

Dr. Penney had retired as chancellor of the University of Massachusetts Boston in 2000 and then founded the Center for Collaborative Leadership there, serving as its director until 2012. Her husband was a retired Massachusetts Institute of Technology professor.

The first woman to serve as president at SUNY Plattsburgh, Dr. Penney arrived on campus in 1986 following the retirement of President Joseph Burke, who went to Albany to become SUNY provost. When tapped to interim at the college, she had been vice chancellor of academic programs, policy and planning at SUNY. She became chancellor and professor of American and women’s studies at UMass Boston in 1988.

During her tenure, which ended with the hiring of Dr. Charles Warren as president of the college in July 1987, Dr. Penney oversaw the receipt of the largest single gift to the Plattsburgh College Foundation’s history at the time, nearly $400,000 from George and Nina Winkel to establish a fund for the “care and support of the Winkel Collection, and the further development, maintenance and proper presentation of the college’s permanent art collection.” The Winkel Sculpture Court was created to display her many pieces.

While at Plattsburgh, Dr. Penney battled a tough budget climate. In an address to faculty at the start of the spring 1987 semester, she said, “The (proposed federal budget) has reduced the amount of money for financial aid one more time, creating a substantial difficulty for our students and for us.

“Education has always been an issue of great importance to Americans, and an educated citizenry is the key to our future,” she said.

One of her more enjoyable moments, she said later, was dropping the ceremonial first puck during an exhibition hockey game between the Plattsburgh State Cardinals men’s hockey team and the touring Moscow Spartak team.