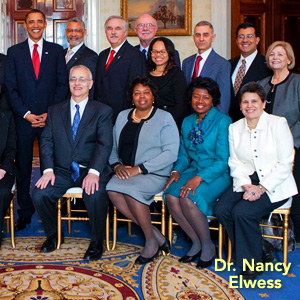 The professor of biological sciences was one of only a handful of college faculty from across the country to receive the award this year. The award was designed to recognize the crucial role that mentoring plays in the academic and personal development of students studying science or engineering, who belong to minorities that are underrepresented in those fields.

While in Washington, D.C., her itinerary included small group advisory meetings with President Obama, the director of the National Science Foundation, the secretary of education and the President’s Council of Advisors on Science and Technology.

At the ceremony, President Barack Obama credited the award winners with doing more than just training a new generation of workers.

"... [a good education is] about instilling in a young person a love of learning and a sense of possibility in their own lives, an understanding of the world around them that will serve them no matter what they do. That's what we have to do as a nation. That's what all of you do every day. And that's what, at root, will lead to greater opportunities and brighter horizons for the next generation and for generations to come."

"During her time at SUNY Plattsburgh, Elwess has developed a reputation for her advanced work with undergraduate students as she helps them conduct DNA research," said SUNY Plattsburgh President John Ettling. "Nearly 100 of her students have given presentations at national and international conferences, and many have brought home top honors.

"Scientists and faculty from other institutions are amazed at the high-level, quality work these undergraduates are doing."

Unlocking the Mysteries of the Past and Present

Her students have been working to unlock mysteries of the past and present as they analyze DNA from the skeletons of ancient Maya, search for the migration routes of Native American tribes, and uncover connections between behavior and DNA.

Elwess is committed to providing these opportunities for a wide range of students.

"I don't want to deny any student an opportunity." - Dr. Nancy Elwess

"I try my hardest to find funding for my students to have an opportunity, whether it's for travel or for a meaningful research project, one that clearly has never been done before," said Elwess.

Winning Awards and Discovering the 'Fun' of Science

This hard work has paid off. It has led to SUNY Plattsburgh undergraduates winning honors for poster presentations at both the National Association of Biology Teachers and International Sigma Xi conferences five years in a row.

In addition, many of Elwess' students have also gone on to pursue higher degrees in the field, being accepted into schools like Upstate Medical University, University of Miami and Brown University. Others have finished their degrees and now hold positions at Yale and the University of Oregon to name a few. "Science is fun, and that is sometimes lost in all the jargon and details unless you have an exceptional teacher like Nancy Elwess," said Dr. Kathy Lavoie, the college's dean of arts and sciences.