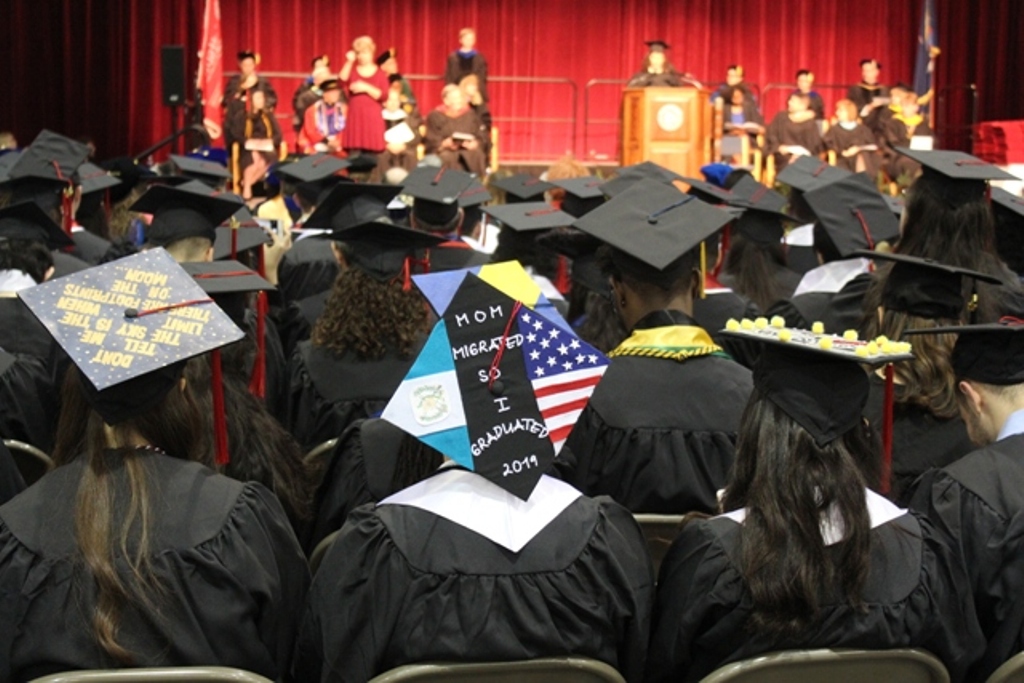 It may have been cloudy skies above Plattsburgh Saturday morning, but it was bright and sunny with the smiles of graduates and their families in the Field House during the SUNY Plattsburgh Winter 2019 Commencement ceremony. 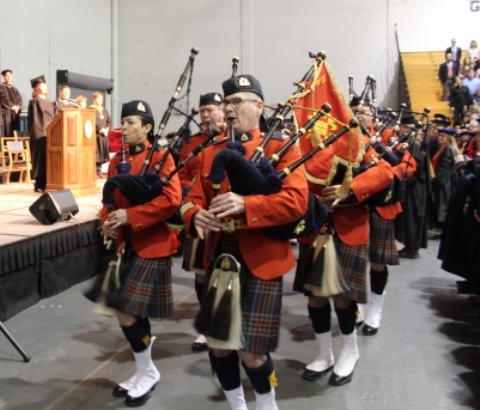 After master’s and bachelor’s candidates filed into their seats to the strains of Edward Elgar’s “Pomp and Circumstance” at the Dec. 14 event, the Royal Canadian Mounted Police Bagpipe Band preceded faculty and staff, playing the traditional and regal “Scotland the Brave” and “The Rowan Tree.” 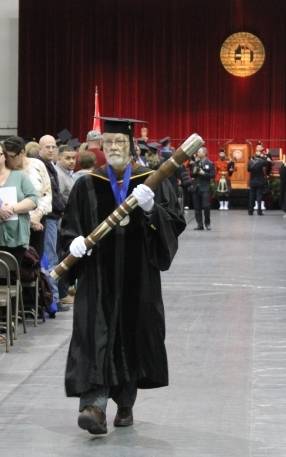 Richard Mikkelson, distinguished teaching professor of art, then carried the ceremonial mace for the last time, an honor bestowed upon senior members of the faculty. Mikkelson will retire following 50 years of teaching this spring.

Platform guests, including student speaker Janelle Brassard, broadcast journalism major from Moriah, took their places before members of the SUNY Plattsburgh Concert Choir performed both the National Anthem and the alma mater.

Acting in the capacity of chief officer in charge, Josee Larochelle, vice president for administration and finance, welcomed all to the event, making particular note of those graduating with academic honors, and with those actively serving in the Reserves, the National Guard or are veterans of the U.S. Armed Forces, a recognition that led to a standing ovation. 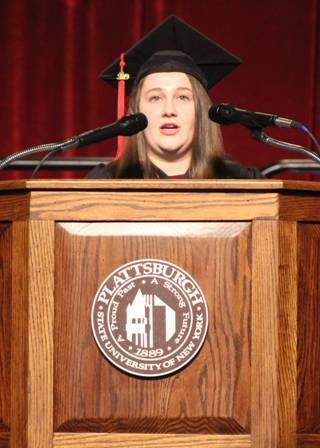 Brassard next took the podium, telling her fellow graduates how she almost got kicked out of college — a different SUNY school — not “because I was partying too hard, or because I did something brash that would call for disciplinary action. I was simply overwhelmed” and needed to get her grades up.

When a friend suggested she transfer, she found herself at SUNY Plattsburgh.

“I immediately noticed a difference in the environment,” she said. “The staff at Tim Hortons would smile at me and ask me about my day. Professors who had already put in a day’s work of teaching would spend their breaks giving me advice”

“Gratitude is one of my favorite things about this place, and I’d like to see it continue to flow through each positive experience on this campus,” she said. “This world doesn’t have to be ‘every man for himself.’ It can be one great team.”

Larochelle thanked the graduates, “for attending Plattsburgh. For some of you, this is your only college commencement; for others, this may be your first or second of several.

“Maybe you arrived on campus a few years ago with a general idea as to a possible career path. Ohers of you didn’t know what you wanted to do but knew a college education was a key to your success,” she said. “When you leave today, you are leaving with the basic skills of reasoning, communication, problem solving, ethical judgement and teamwork. These are very useful for almost any endeavor in this diverse and globally interconnected world.”

She also commended students for their activism and “attention on matters of diversity, inclusion and social justice.” 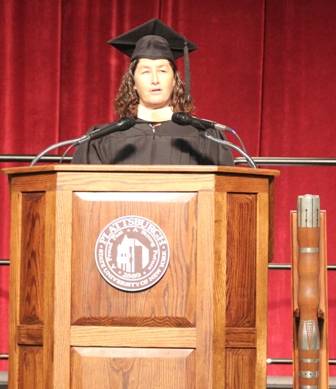 “As a campus, we work to be a leader for others to follow, creating a greater climate of understanding. Your role in this growing effort has been critical,” Larochelle said. “After you leave here, I have confidence many of you will contribute to making our world a better place for yourselves, your families and generations to come.

“We join with your parents, family and friends on this special occasion because we are proud of the many students who have graduated from this institution, especially for the first generation students who are graduating from college today,” she said. “At this moment, in this building, I want you to know how proud I am of your accomplishments to this point in your lives. Congratulations.”

After each student’s name was called to cross the dais, Essence Hightower, in her last official duty as outgoing president of the Student Association, led graduates in the official tassel change, moving the tassel, from the right side of their mortar boards to the left, “over your heart — the true home — your alma mater.”

Dr. Ashley Gambino, a member of the Class of 2004, director of clinical audiology at the college, and president of the Plattsburgh Alumni Association, then gave the newly minted members of the association an official welcome and urged them to stay in touch, continue their involvement in their alma mater, and to “come back for your first Homecoming Weekend Oct. 16 and 17, 2020.”

The ceremony, which began at 10 a.m. Dec. 14, can be viewed in its entirety here: https://www.plattsburgh.edu/plattslife/commencement/archive.html.