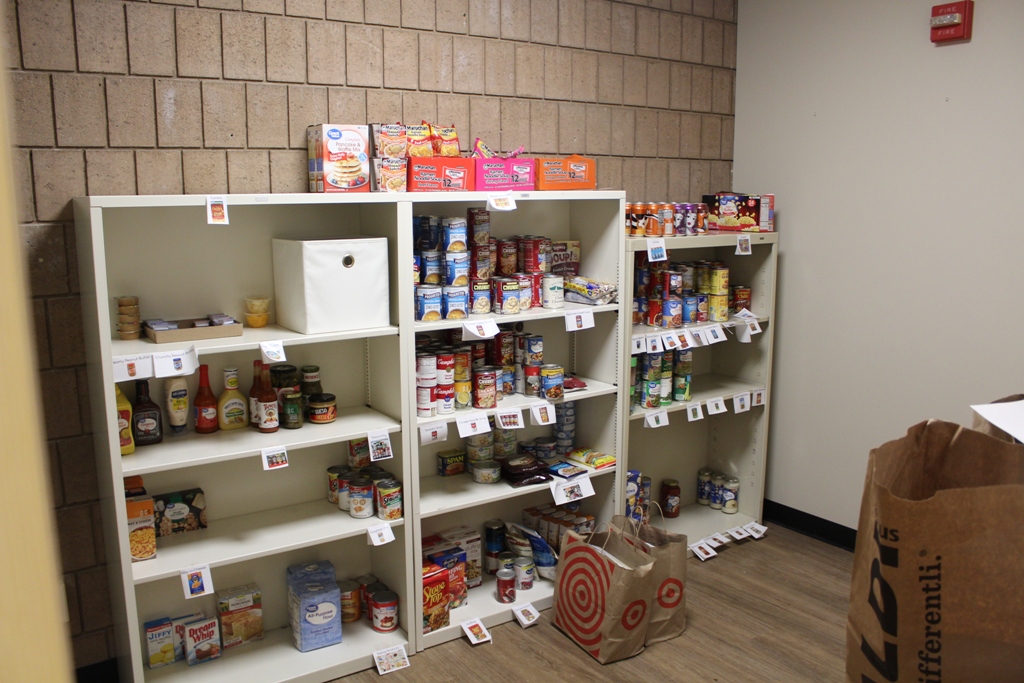 As food insecurity increases nationwide, SUNY Plattsburgh sees it first-hand as more and more of its students make use of the campus food shelf. 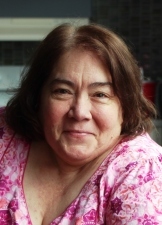 Since recently relocating from the lower level of Macomb Hall to a space in the HUB in the Angell College Center, usage has explode, said Dr. Michele Carpentier, director of special programs and assistant vice president of enrollment and student success. Carpentier’s office also relocated from the same Macomb Hall location.

“Since we moved here, we have used what would have been three weeks’ worth at the old place,” she said during the first week in the new location. “We’re having a hard time keeping up with the demand.”

The move from Macomb accounts for some of the increase in traffic, Carpentier said.

“Students say they didn’t know where it was before, and having it in a central location makes it more accessible,” she said.

“It is super convenient since it is in the middle of SUNY Plattsburgh and more accessible for everyone,” he said. And it’s accessible whenever the Angell College Center is open. 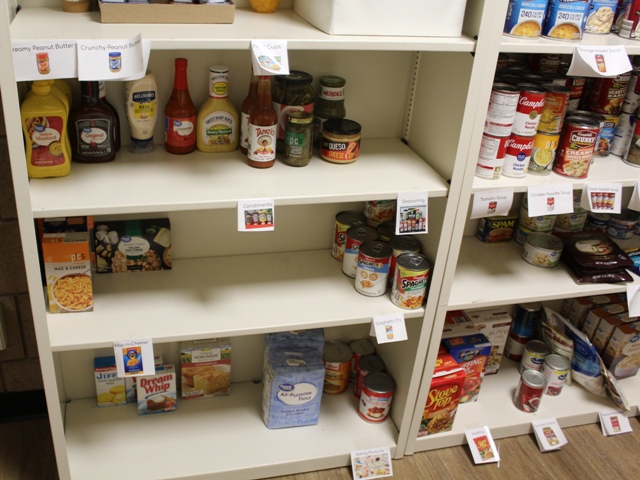 Keeping food on the shelves means relying primarily on donations of cash and foodstuffs. Like a family working to stretch its food dollars, Carpentier must do the same, trying to stretch food pantry funds by working out deals with companies that can provide food in bulk at a discount. Right now, she places orders regularly with Walmart because the cost is lower than shopping at grocery stores. But still they come to $700, $800 an order.

“I have to place the order, then someone has to go pick it up and load it into the building.”

The shelves are then stocked according to product type. A new system of online ordering requires someone to pull food and other products from the shelves and bag them with the “receipt.” 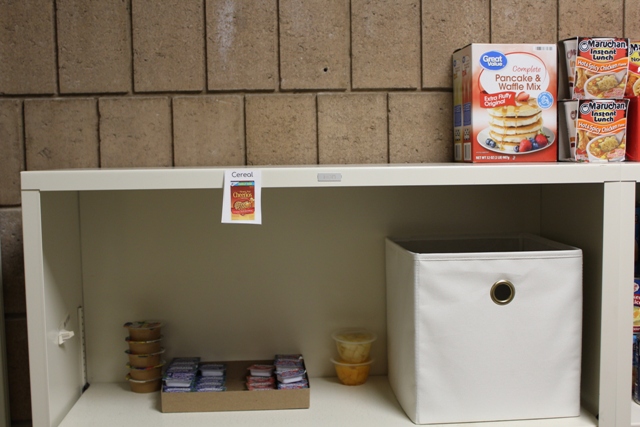 “Work study kids pack the bags,” Carpentier said. “Students come in, show their idea and off they go. We don’t keep records of who uses the food shelf; we try to keep it as private as possible.”

For her part, Carpentier has to assess what makes the most sense to order — which food and other products carried, like personal-care items, paper goods and cleaning supplies, are requested and which, like canned green beans, sit on the shelves. Vienna sausages fly off the shelves.

But Carpentier tells students “to pick up their dry goods here and spend their money on better-quality food.” In addition to a variety of canned goods, pastas and sauce, soups, and ramen, they also provide things like soap, toothpaste and toothbrushes, shampoos, menstrual products and paper products — those things that the food insecure may have to forego in order to afford to eat.

“Kids just can’t afford it,” Carpentier said. “Some can barely afford tuition. The price of menstrual products is ridiculous. We keep tampons, pads — a lot of things that are non-food but are equally needed and required.

Moving from Macomb to the ACC is only part of the increase in traffic, Carpentier said. 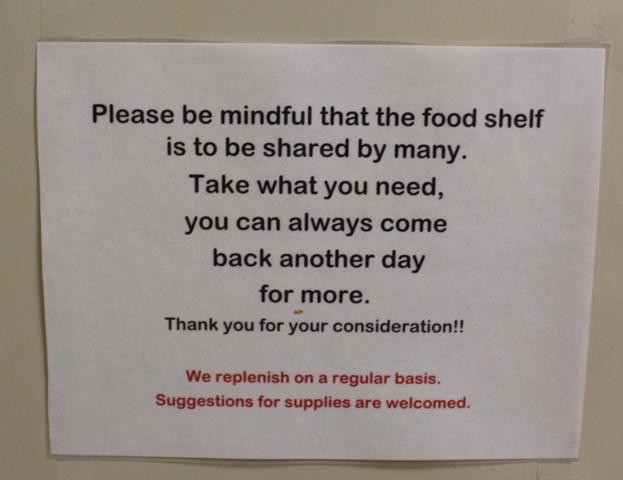 “We have students who are stretching what little money they have to make it through the semester; others don’t know how to use their meal plans to maximize the program. Swipes at the dining hall, where it’s all you can eat, is not the same as a swipe at the Sundowner, where you’re paying for a sandwich, cookie and a drink,” she said. “And for an active 18-year-old, it’s not enough food.”

“I use it to get some food that can last me for longer and to help me pay less money for the meal plan on campus,” Martinez Abad said. He said having a food shelf on campus allows him to save money by choosing the least expensive meal plan and still feed himself.

“Ramen, snack (foods), and vegetables.” The pantry stocks canned vegetables that students often use to mix into foods like ramen and rice. Martinez Abad said he’d like to see more healthy options offered; inventory can be hit or miss depending on donations of food and cash.

The college also has a high number of students living off campus, Carpentier said. Roughly 1,620 students live in student housing; some 2,800 reside off-campus.

“Students who choose to live off campus think they can afford it until they see how much groceries and other items cost,” Carpentier said. “They come in here to supplement what they can’t afford.”

Martinez Abad visits the food shelf every other week to help him stretch his food dollar. He said students should feel comfortable taking advantage of the offerings, saying that if students “need some extra food, are suffering from (not having) money or want to save money, the pantry is a good place to get food for free and help you grow your college experience.”

It also helps reduce the stress that food insecurity can cause.

“You won’t to have to worry about spending a lot of money on food,” he said. “The food pantry is a (good) place to get food and toiletries in a convenient and not-expensive place. It is also a good way to get some assistance and save some money during these hard times.”

“We scrape from everywhere we can,” Carpentier said. She said several departments are very vested in the food shelf, donating often. The library staff often donates and recently donated a refrigerator-freezer for perishable foods.

Additionally, grant money has been secured “that we’ll be able to use to have snack stations all over campus. Anyone walking by will be able to grab a snack,” Carpentier said. “The idea is that even college kids with meal plans don’t have access to enough food. No one should be without food, even college students.”