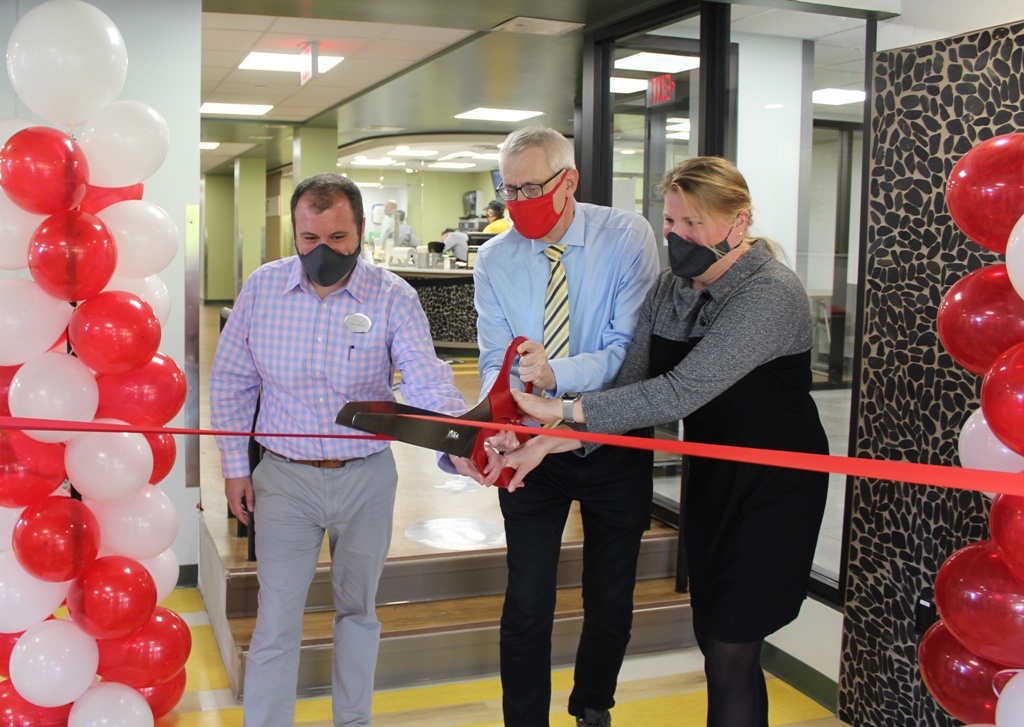 SUNY Plattsburgh and its food-service provider, Chartwells, cut the ribbon Oct. 12 on a new deli-style venue, Kent Café, in the lower level of Kent Hall along the Saranac River Trail. 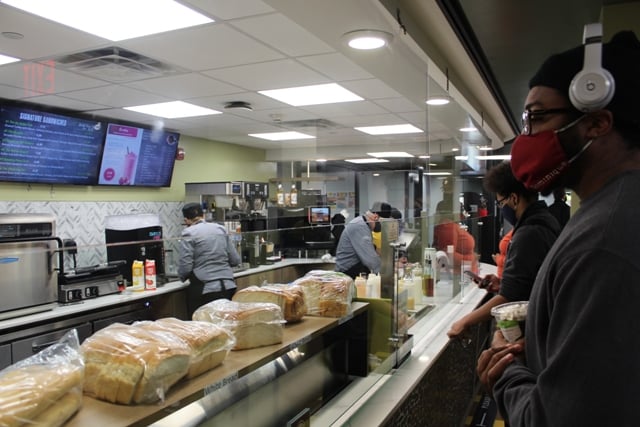 Sandwiches are made to order, and six  “specialty sandwiches” are named after campus buildings and icons: the AuSable Club, Italian Angell, Panini on the Hudson, Sibley Stacker, Hawkins Pond Tuna, and the Burghy. The site also serves smoothies, cappuccino, espresso and lattes along with regular soft drinks.

“The big take-away is the menu derives from student requests,” she said. “Students were upset when we closed Subway and Little Al’s. We tried to work in a bit of what you’d get at Subway and what you could get at Little Al’s. We moved that menu here.” 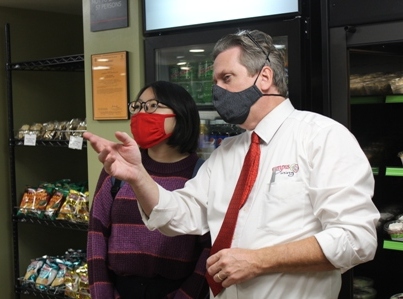 Amy Rascoe, marketing director with Chartwells, said the students love the fact that they can “just come on downstairs without having to go outside. They’re going to love this in the winter.”

Kent Hall had been taken offline in May 2019 for renovations, reopening for upper classmen and graduate-level students this fall. While the Kent project cost $16,954,213, funded through bonds made available through the Dormitory Authority of the State of New York and paid for through revenue earned by the residence hall, according to Rascoe, College Auxiliary Services contributed $233,000 to the Kent Cafe project, which included purchase of dining equipment and furniture.

“Our project superintendent, Jules LaPoint, and his crew did an incredible job getting this project back on track after being forced to close the job site for well over a month because of the COVID pandemic,” Kellerman said. Other pandemic challenges included a delay in getting commercial dining equipment and furniture from manufacturers. It also delayed the grand opening.

“We were hoping to open when school opened, but everything got pushed back this summer,” Rascoe said. “Everything fell into place except for some of the seating, which we are waiting for now. Rules for social distancing will apply.”

Although indoor seating capacity is 57 people, CAS is following COVID safety protocols and has limited capacity to 28 people, or 50 percent indoors at this time with additional seating being added outdoors once dining there is established, Rascoe said.

COVID also caused changes to the design of the deli counter. Plexiglas barriers had to be erected surrounding the counter.

“It figured into the delay, but it looks like it was originally planned that way,” Rascoe said.

And although the facility isn’t accessible through the residence hall to outside clientele, the doors off the Saranac River Trail will be open during business hours, Monday through Friday from 11 a.m. to 8 p.m. for more information on Kent Café or any of the dining venues on campus, contact Campus Dining at 518-564-3085 or visit https://www.plattsburgh.edu/plattslife/food-dining/index.html.