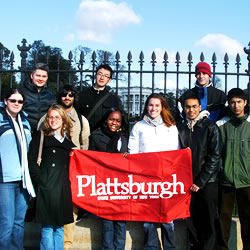 SUNY Plattsburgh was well represented at this year's international undergraduate Sigma Xi conference in Washington, D.C., this November. Ten of the 300 students in attendance were from the college.

SUNY Plattsburgh students have been gathering major honors at such events over the past several years. For four years in a row, they've won top honors at the National Association of Biology Teachers and International Sigma Xi conferences. This year's conference was no exception.

This time, Nishank Bhalla, a junior biochemistry major , won the highest award for a poster presentation of his research sequencing DNA collected from skeletons of the ancient Maya. This is the second time that Bhalla won this award for his efforts to determine whether or not the Maya had the disorder Beta-Thalassemia, previously thought to have been brought to the Americas from the Old World.

SUNY Plattsburgh has what might be the world's largest collection of bones from the ancient Maya. These were collected over the years by SUNY Distinguished Professor Mark Cohen, who was given permission by the Belize government to store and research the remains.

Bhalla's most recent award comes on the heels of yet another award, won by Elizabeth "Betty" Lavoie last month. Lavoie was given top honors at this year's National Association of Biology Teacher's conference.

These students and others are doing DNA research under the direction of Associate Professor Nancy Elwess and Adjunct Lecturer Sandra Latourelle. Some, like Lavoie and Bhalla, are analyzing the DNA of the ancient Maya, unlocking the doors to mysteries of the past.

Others are studying a newly found hemoglobin gene in planaria (flat worms). And still others are working on a joint project involving Elwess and Latourelle with SUNY Distinguished Professor Jeanne Ryan and Professor William Tooke of the college's psychology department. Members of the two departments are looking at why some genes may express themselves behaviorally and others may not. In particular, they are studying the genes for risk-taking/thrill-seeking behaviors, as well as those for aggressive behaviors. As part of this research, they are looking at the genes of athletes from the college's award-winning hockey team, a group that displays aggressive behaviors in a positive way.

Elwess and Latourelle worked hard to make the latest trip possible for all of the students who went. While grants from College Auxiliary Services and Redcay paid for transportation to the conference, there were no funds available to cover other expenses, like those of the hotel.

Fortunately, Latourelle's daughter lives in the area and offered her home as a place to stay. Latourelle's son also pitched in, securing subway tickets for the group.

Several of those attending the conference were from other countries. They came to SUNY Plattsburgh from Japan, Nepal, India and Nigeria. Additionally, one of the students from Latvia recently became a U. S. citizen. The college has a thriving international student program and, as a result, has the second highest number of international students, per capita, of any college in the State University of New York System - second only to the University of Buffalo.

This trip provided a great opportunity for the students to present their research, tour the White House and explore the nation's capital.

"I don't know who came back more exhausted the students or me," said Elwess.