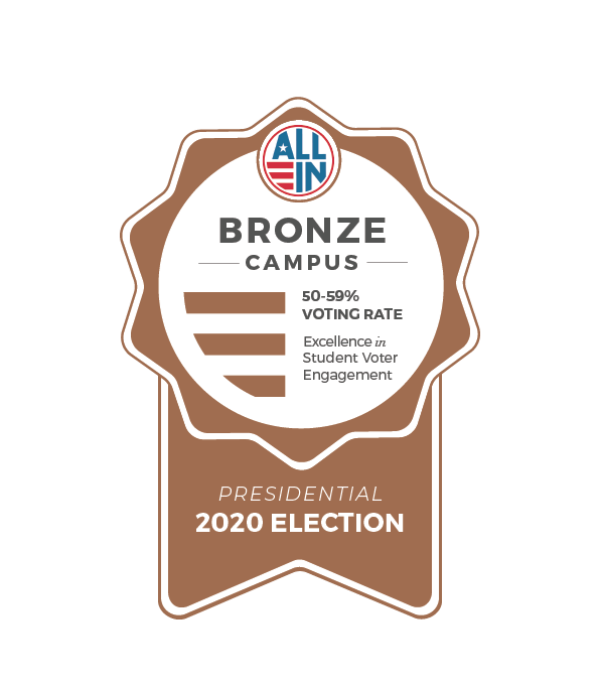 SUNY Plattsburgh saw an increase of student voters during the presidential election in 2020 over the 2016 election, matching what was seen nationwide according to the Institute for Democracy and Higher Education at Tufts University.

The 56.3 percent of student voters, as compared to 34.1 percent in 2016, earned the college a Bronze Campus Award for turn-out numbers, said Jim Sherman, assistant director of Campus Housing and Community Living at SUNY Plattsburgh. Bronze levels were 49.5 to 59.4 percent student voters.

“The highlight in this report is that our college increased voter turnout by 22 percent in 2020 as compared to 2016,” Sherman said.

The report, released in early November, showed record-breaking findings nationwide. On campuses across the country, students built on the momentum swing of the 2018 mid-terms, outpacing all Americans voting in the recent presidential election.

Nancy Thomas, director of the Institute for Democracy and Higher Education, said they attribute the high level of participation “to many factors, including student activism on issues such as racial injustice, global climate change and voter suppression, as well as increased efforts by educators to reach students and connect them to the issues and to voting resources.”

For his part, Sherman works as a conduit for student voter participation and turnout,  Lizzie Wahab, vice president for enrollment and student success, said she was excited to support Sherman’s “efforts in students’ engagement in the political spaces.”

“This shows our students conscientiousness and our emerging leaders’ interest in civic and political interests,” Wahab said. “Kudos to Assistant Director Jim Sherman for increasing all of our awareness of our students’ work with a data-driven approach. Adding empirical tools on our qualitative measures truly elevates our work toward a student-centered college.”

She thanked Sherman for his “out-of-the-box thinking and care of our students’ interests.”