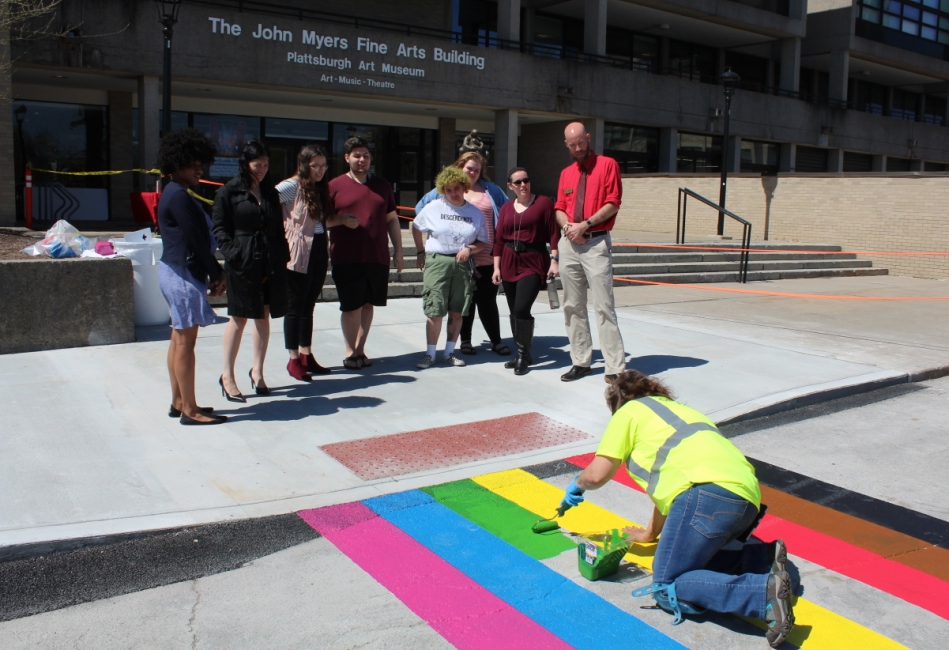 The SUNY Plattsburgh Student Association, in conjunction with college administration, had a rainbow-striped crosswalk installed by members of the college grounds crew on May 6. The bright-striped area sits between the sidewalk in front of Myers Fine Arts Building and the Myers parking lot.

The Rainbow Crosswalk was an initiative started last year by Danial Khoshkehpazi, former Student Association vice president for student affairs and diversity. It has been a collaborative effort with the SA, the campus LGBTQ+ resource, RADIUS, and Bryan Hartman, vice president for student affairs, according to Jacob Avery, a member of RADIUS and assistant director, Center for Student Involvement.

Employees in the Administration and Finance division, including Josee Larochelle, vice president for administration and finance; Bill Circelli, facilities director; and Jessica Gregg, supervisor of grounds, were instrumental in getting approvals and making it happen.

“The use of the Philadelphia Pride flag was chosen to be used on campus because it highlights the importance of not just the LGBTQ+ community but also the black and Latinx movement,” Avery said.

“This crosswalk will hopefully be an avenue and a symbol for students from the LGBTQ+ community to feel welcomed, respected and valued by both the college and by their peers,” said Kira Paulemon, current SA vice president for student affairs and diversity. “We hope that this sends a message to the students that we want to constantly work to make this school a safer space for everyone.”

“It’s nice to see some color added to this campus,” she said. “That not only makes it a brighter place but a more accepting one.”