Meet a few of our current students!

Work experience is one of the prerequisites for landing professional jobs in the outdoor industry. That’s why we encourage our students to start working in the profession as soon as possible. In fact, EXP students typically hold a wide-range of outdoor jobs during their college years. Here are some of our students and the jobs they’ve worked at recently. By the way, if some of the pictures don’t mesh with the jobs, that’s because EXP students are out there doing it all! 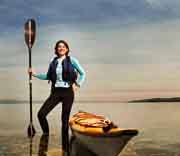 A double major in environmental science and expeditionary studies, Allison worked this past summer as an intern on The Northern Forest Canoe Trail, where she spend all summer working on the 700 mile long water trail from Old Forge, New York to Port Kent, Maine. An accomplished paddler in canoe or kayak, Allison holds the Three Star and Level One Coach awards from The British Canoe Union.

Dylan worked as the lead diver in year five of a five year Eurasion Milfoil Eradication program, locating, mapping, and removing plants from 5th, 6th, and 7th Lakes in the Fulton Chain. Though a discipline outside the scope of expeditionary studies, Dylan said that “thinking about the connection between my diving, just like skiing or paddling, and the world around me is what expeditionary studies is all about.”

Russell worked as a ranger at Philmont Scout Ranch in Cimarron, New Mexico, where he did everything from outfitting to guiding and teaching topics from protocols for dealing with bears to navigation. A double major in education and expeditionary studies, Russell’s summer “confirmed for me that my choice to add expeditionary studies was the right one.”

Andy spent this past summer as Head of Mountain Biking at Camp Laurel in Readfield, Maine, where he planned and taught mountain biking classes off-site. “Expeditionary studies requires that my skills be wired but as important is my ability to lead. My summer job made me realize why.”

Tova spent last summer on the Kenai Peninsula, working as an outdoor and nature director at a summer camp in Cooper’s Landing, Alaska. “Each year I advance my skills in my EXP classes and as a result each summer job gets better and better.” This year she taught nature classes and led overnight trips into the backcountry of Alaska. “Each summer keeps getting better and I can’t wait for the next adventure!”

For the past two summers, Mike was an expedition leader for The Road Less Traveled (RLT), where he led teenagers on week-long trips in Montana, Washington, Idaho, and Colorado, including summiting Mount Rainier and working at Mission: Wolf, a wolf rehab center in Westcliffe, Colorado.