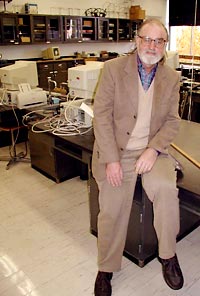 Initially in the transport properties of the II-VI semiconductor and alloy group of materials, mainly GeTe and SnTe, then in the magnetic properties of an associated compounds, GeMnTe.

Collaborated with Dr. A. Rheingold in the preparation and study of the electrical properties of polymeric organic materials, principally polymethylpolyarsine.

Investigated the very low temperature thermal and electrical properties of both II-VI and organic semiconductors (sabbatical year in France at the CNRS Low Temperature facility in Grenoble).

Have studied the optical and electrical properties of thin film semiconductors in collaboration with Dr. A. Brinkman at the University of Durham (2 sabbatical years). Recently revisited the CNRS group in Bellevue and am now actively collaborating with Dr. O. Gorochov and Dr. Jinzhong Wang on X-ray analyses of high purity and high quality thin film zinc compounds. The aim is to produce marketable optoelectronic materials for use as light emitting diodes, detectors, lasers and other electronic devices.

Student research Lewis conducted involved a long-standing study of solar flare activity, using a 12’ satellite dish to detect microwave radio radiation at 4 GHz. Physics senior Evan Spadafora analyzed this flare as part of his undergraduate research and presented his findings at the Rochester Symposium for Undergraduate Physics Students in April 2006.