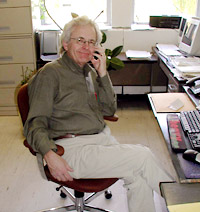 Dr. Douglas A. Graham has taught many courses in the physics curriculum, including general physics, modern physics, optics, electronics, mechanics, statics, and astronomy. In the past, he has taught several computer science courses, including FORTRAN, Pascal, Machine and Assembly Language, operating systems, and data structures.

As a part of his continuing scholarship, Doug Graham has traveled to several sites in northern Canada to set up and maintain magnetospheric research stations. He has also been to King George Island off the Antarctic coast twice to conduct airglow research.

Doug Graham is married and has two children. Activities he enjoys include travel, home improvements, and amateur radio.