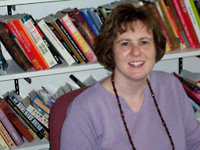 My interest in studying women’s history began when I was an undergraduate sophomore spending a year in the People’s Republic of China, through conversations with my Chinese friends. Coming to China as a nineteen year old, it was easy for me to see how women in China had, historically and currently, experienced oppression. In discussions about women’s issues, my friends challenged me to see more clearly oppression for women in the United States, albeit at times in somewhat more subtle forms. Like many American girls growing up in the 1970s and 1980s, I had thought of “liberation” for women as something that had already been accomplished in the United States, something no longer worthy of discussion. My time in China opened a new world of questions over what constituted “liberation” and “oppression” for women. When I learned more about graduate study in women’s history later in my undergraduate career, it seemed appropriate and natural to look at women’s history transnationally — for example, to see U.S. Women’s history, my major field, in a broader global context.

As a historian of women, one of my main goals is to encourage my students to explore different visions of “liberation” for women. I also try to show how ideas about gender impact not only women, but all of society. I am always happy when I hear from my male students that they had no idea how much the study of women’s history could matter to them!

Currently I am working on a study of the medical ministries of two Chinese women medical missionaries, Kang Cheng and Shi Meiyu, also known as Ida Kahn and Mary Stone, who graduated from the University of Michigan in 1896 and traveled back and forth between China and the United States throughout their lives. This project has allowed me to combine my interest in U.S. women’s history, Chinese history, and the history of medicine, all areas that I teach at Plattsburgh State. I am also co-editor for a forthcoming volume on American women missionaries in a variety of cultural contexts: Competing Kingdoms: Women, Mission, Nation and Protestant Empire, 1812-1960, published by Duke University Press, and expected to appear in Fall of 2009. My essay in that volume explores the relationship of Kang Cheng to her adopted mother, an American woman missionary named Gertrude Howe, in order to examine broader missionary attitudes towards single women missionaries as agents of cultural transmission. Another article, “’How Better Could She Serve Her Country?:’ Cultural Translators, U.S. Women’s History, and Kang Cheng’s Amazons in Cathay,” forthcoming in the Journal of Women’s History, argues for the importance of bilingual, bicultural elites such as Kang in our understanding of transnational communities of women.