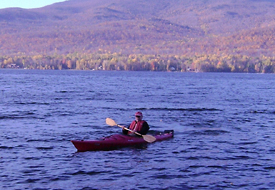 Come visit my office and you’ll see a phenomenon that was once called “a cabinet of curiosities.” Call it “clutter” or call it “culture,” it’s the makings of a museum. Yet, I do believe that everything has some purpose in life. Mine is, in part, to study, teach, and write about the preservation and interpretation of old buildings, ships, museum curios, and “historic” places. In the mid-1980s I not only started teaching public history here, but also began working on a book series, Preserving America’s Past. While my first work examined Virginia after Reconstruction, the second focused on New England in the early twentieth century. For the last twenty years, however, I’ve been voyaging on the seas of maritime history. As I research and write more about America’s maritime heritage and preservation, I’ve integrated much of it into my courses on “U.S. Historic Sites,” “U.S. History Museums,” and “US Historic Preservation.” Blending my teaching and scholarship are three additional books: Preserving South Street Seaport, Preserving Maritime America, and what’s tentatively titled and still ongoing, “Preserving Maritime San Francisco: How a Decrepit Waterfront Became a National Park.” Google me to see if I reach home port, or if I’ve been lost at sea!