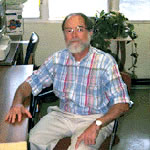 Dr. Denenberg is originally from Washington D.C. He is a graduate of Union College, Schenectady (B.S. in Mathematics) and the University of Massachusetts (Ed. D. in Computer Science Education).

Professor Denenberg had extensive experience in education, government, and industry prior to coming to Plattsburgh in 1977. His government employers have been the Naval Ordnance Laboratory (serving as a technical writer), the U.S. Navy David Taylor Model Basin (as a mathematician and programmer), the Center for Naval Analyses (as a programmer analyst concerned with Simulation and Modeling and Numerical Analysis). Industry experience includes Metametrics Corporation (for whom he wrote a book entitled Computer Systems for the Small Businessman), Westat Research of Bethesda, Maryland (where he was involved with both programming and marketing). Education experience was at the University of Illinois at Champaign-Urbana (as a Senior Research Programmer on the ILLIAC IV project) and Parkland College (as an Instructor in Data Processing).

Professor Denenberg came to Plattsburgh in 1977 as an assistant professor. He was promoted to associate professor in 1980, and to professor in 1987. For a number of years he served, part time, as director of academic computing and in this capacity, he founded the Microcomputer Laboratory, which was formerly located in Feinberg Library. Professor Denenberg spent the 1984–1984 academic year on leave at Open University in Milton Keynes, England, where he worked on projects in computer assisted learning, LOGO, and the teaching of programming and problem solving skills.

His professional interests are in the area of computer science education and are currently focused on developing problem-solving skills in college freshmen and sensitizing upper class students to the ethical issues related to computers and technology so that they may write about them with clarity and coherence. He likes to ride bicycles, meditate, garden, sail, cross-country ski, read classical fiction.