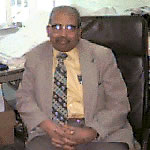 Professor Archibald is originally from New York City. He is a graduate of the Bronx High School of Science and holds bachelor’s and master’s degrees from New York University.

Professor Archibald came to Plattsburgh in 1970 after spending seventeen years as a computational scientist in government and industry. His first assignment was with the Air Force, where he wrote programs (in machine language) and analyzed results relative to the simulation of nose-gear vibration (i.e., shimmy).

The major part of Professor Archibald’s industrial career was with the General Electric Company at the Knolls Atomic Power Laboratory in Schenectady, New York. During earlier years, he was involved in the programming, analysis and development of computational systems for the simulation of nuclear power reactors through neutron diffusion theory. During this period, he completely revamped the method for solving these problems. (A significant amount of this work was done in assembly language.)

In later years, he was concerned with the selection, development, and management of the computational facilities themselves. Professor Archibald’s final assignment at General Electric was at what is now General Electric Information Service Company, where he was involved in the simulation of the commercial time-shared system.

Professor Archibald came to Plattsburgh as an associate professor. He was promoted to professor and first assumed the chair in 1974.

His interests over the years have been in programming, programming languages, computational science, supercomputing, academic computing, and computer science education.

He is actively engaged in a variety of activities related to the acquisition and operation of up-to-date computational facilities throughout all of SUNY.

In addition to his service to the Department of Computer Science, he served as acting chair of the Department of Mathematics from 1988 until 1990, and as associate dean of the Faculty of Arts and Science from 1994 until 1996. He remains active on campus following his retirement in 1996.